Influence of AfCFTA on Enhancing Oil and Gas Market in Africa

The AfCFTA agreement, which commenced on January 1, 2021 was signed by 54 African Union member countries and envisages the establishment of a massive free-trade zone with the potential to generate an estimated US$3.2 trillion worth of inter-country trade across Africa. The African Union (AU) says that the AfCFTA will create the world’s largest free trade area estimating that its implementation will lead to around a 60% boost in intra-African trade by 2022. The vision and commitment of African leaders to the objectives and principles of economic cooperation, led them to create the African Continental Free Trade Area (AfCFTA) as an instrument for fostering African economic development. This commitment aims to ensure barrier-free trade in relation to gas and pipeline facilities which envisages the need to establish gas pipeline infrastructure for quick-access and easy transportation of gas from the well-endowed countries to the needy countries in the sub Saharan African countries. This increased demand will create a better job market as suppliers will need to build up their work force. Increased income then results in additional demand for consumer goods and services, thus persuading a complete round of economic stimulus.

Recently, there have been a series of major new gas discoveries across Africa in recent years. This includes a “significant” find off South Africa’s southern coastline earlier this year, along with new discoveries in Ghana, Nigeria and Senegal, to name but a few. In Eastern Africa, Mozambique and Tanzania are well advanced towards utilizing their natural gas reserves. In North Africa, it would appear that the latest gas discoveries in Egypt and the Eastern Mediterranean will soon be utilized to feed domestic growth. These developments could fit well with Africa’s push for industrial growth and its need for reliable electricity supply (constraining the expansion of more polluting fossil fuels). Much will depend on the price at which gas becomes available, the development of distribution networks, the financing available for infrastructure and the strength of policy efforts to displace polluting fuels.

Status of Oil and Gas in Africa before AfCFTA implementation

Just as Africa’s oil industry was recovering from the aftermath of the 2014 oil price crash, another global crisis cast a thick shadow over oil markets worldwide in 2019. The Covid-19 outbreak stalled business activity and shut down air travel globally, causing the International Energy Agency (IEA) to announce that demand would fall to its lowest rate in almost 10 years. The crisis has changed how oil producing countries across the African continent view their oil industries. Africa becomes a major player in natural gas as a producer, consumer and exporter. Gas demand in Africa doubles to 2040 in the Stated Policies Scenario. Countries like Algeria, Angola, Egypt, Libya and Nigeria who are endowed with crude oil for gas production can increase their trade volume and revenue as the world is switching to cleaner energy for commercial and domestic use. With the introduction and implementation of AfCFTA that seeks to ensure free trade in the continent, these countries will be able to trade without being subject to high tariff payments. AfCFTA is opening up Africa to African investors. The ability to transform Africa by making energy cheaper will be impressive. One main anticipated outcome of the deal, for example, is increase in industrial production, which will depend on the quality, sustainability and safety of energy sources at scale for industrial growth.

Prior to the inauguration and implementation of AfCFTA, African countries purchase their oil and gas from Singapore, Denmark, Switzerland, Maldives, South Africa and Nigeria while the largest consumer of crude petroleum in Africa include Egypt, Algeria and Nigeria (fig 1). On the other hand, the growth in Africa population is an advantage to boost Africa oil & gas sales. According to the Statista (2020) Nigeria has a population of 206. 1 Million, followed by Ethiopia (114.9 Million) Egypt (102.3 Million) Congo Republic (89.5 Million), Tanzania (59.7 Million) and South Africa (59.3 Million). 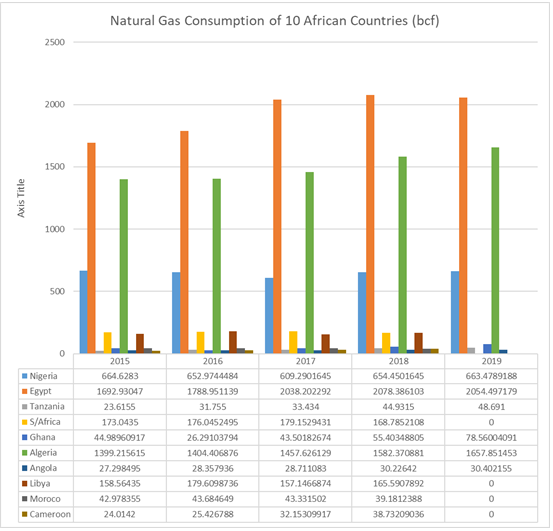 Benefit of the AfCFTA Oil and Gas Market

This market is estimated to involve more than 1.2 billion consumer in Africa that consume oil and gas in one way or the other, domestic cooking, factory & home lighting and industrial fuel for the production of consumer products. AfCFTA oil and gas market will boost the sector workforce due to increase in human capital efficiency as a result of the incentives that will be created in the sector.

Demand for natural gas in the region is expected to grow as population increases every year. According to the Africa Energy Outlook (2019), Africa’s population is among the fastest growing and youngest in the world. One-in-two people added to the world population between today and 2040 are set to be African, and the continent becomes the world’s most populous region by 2023, overtaking China and India. A regional approach to meeting the demand makes economic sense, if this approach to sales of oil and gas is adopted.

Investors will be motivated to meet up with the increase in demand thereby causing inflow of capital from the Eastern and Western worlds to the African Continent. Large machines will be shipped in to produce large quantity of consumer product. The machineries need energy inform of oil and gas to run production. This will signal to the oil producing countries to increase their production capacity. More workers will be employed and new technology will be adopted to produce large volume of oil and gas at cheaper rate. As more goods and services are produced, the African GDP will be boosted and aim will be accomplished by 2050.

Conclusion
Influence of AfCFTA on enhancing Oil and Gas market in Africa has been examined and it is observed that Africa has the opportunity to create the largest market in the world for oil and gas than seen in many other parts of the world, or economic zones. Africa’s unique position as a major natural resource country makes this even more realizable. The AfCFTA is a tremendous opportunity to not only oil and gas market growth but also to create regional public goods, especially infrastructure, that will enable a prosperous and sustainable future for Africa oil and gas.