The number of LPG storage terminals in the country has been gradually increasing and is expected to continue increasing as demand for LPG increases.

Liquefied Petroleum Gas (LPG) is produced as a by-product of natural gas processing or crude-oil refining. In 2019, the quantity of Nigeria’s marketable produced natural gas was 48 billion cubic meters, and 36 billion cubic meters of natural gas was exported. LPG is part of the family of hydrocarbons referred to as Natural Gas Liquids (NGLs) which consists of ethane, pentane and the alkanes in-between. These NGLs are further separated into individual products such as ethane, or LPG (which is a mixture of propane and butane), after which they are further processed into final products (e.g.  Ethane is processed into plastic bags) or distributed as they are (e.g. LPG is distributed to end-users as a cooking fuel). The point of production is referred to as the up-stream sector.
Locally produced LPG is supplied through NLNG and stored at the terminals, mainly at Apapa, Lagos. Imported LPG is also stored in those storage terminals (also referred to as depot). Off-takers then purchase LPG from these depots and distribute them to the gas plants. The gas plants vary in size, and this size determines whether they will serve only end-users or whether they will also serve LPG retail shops. The sector which provides gas to the end-users is the Down-stream sector.
This article focuses on the operators of the storage terminals in the down-stream sector. This is a very essential service as they serve as the link the between the upstream operators and the rest of the supply chain. Storing LPG provides a form of product supply security. As in the case of Senegal, the number of terminals has a role to play in the stability of LPG supply. The LPG storage terminals receive gas from ships and then store it. The gas is then distributed via trucks to the gas plants. Nigeria currently has 8 LPG storage terminals in Lagos, Rivers, Cross-River, and Delta states.

POLICY AND REGULATORY CONCERNS
The energy market is strongly dependent on the decisions made by political actors, due to the nature of the industry. Some of these policies are either targeted at a stage in the value chain or the entire LPG value chain. The government policy which removed the monopoly in the LPG storage terminal business has resulted in an increasing number of storage terminals. The value chain effect remains; the increase in LPG demand will lead to an increase in supply infrastructure, which includes storage terminals. This flow will work especially because the terminal storage sector is operating as a free market.
Government intervention in the LPG market has involved the introduction of both policies and strategies. The Federal Government of Nigeria has a committee responsible for recommending policies and actions to increase the adoption of LPG in the country, (a target of 40% has been set) and the increase in demand will require a corresponding increase in supply facilities, such as terminals.  In 2019, Federal Government of Nigeria announced the LPG expansion program which is aimed at switching auto-mobile dependence on Premium Motor Spirit (PMS) and diesel to LPG. Another example of favourable government policies includes the removal of VAT for LPG, which was to increase the affordability of the product.

The above storage terminals are mostly located in Lagos State, with additional located in Delta, Rivers and Cross-River. The newest LPG storage terminal inaugurated is the Rainoil storage terminal, which is also located in Lagos. Most of the LPG coming into Nigeria therefore comes in through Lagos State. A recent survey indicated that the trucking costs of LPG across the country could be reduced by up to 25% if the Port Harcourt and Calabar terminals are fully functional. The effect of the status quo is seen in the prices of LPG in the South South region being the highest in Nigeria. 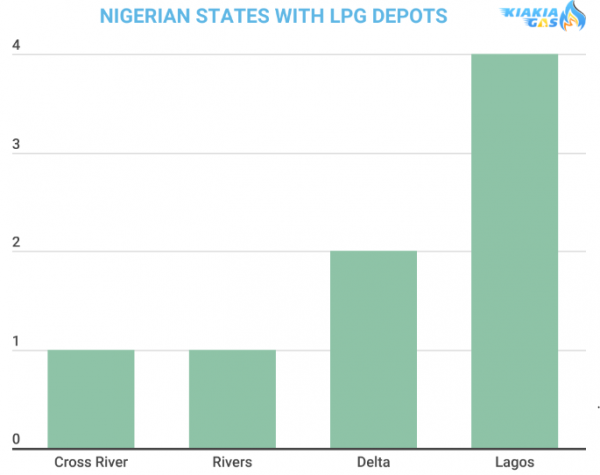 Rainoil Limited: as the other companies mentioned, Rainoil Limited was originally operating in the PMS sector. Rainoil recently constructed a 50 million litre capacity multi-product depot in Ijegun, Lagos State. The Ijegun project hosts an 8,000 MT LPG storage capacity and received its first LPG cargo in July 2020. Rainoil is also investing in other aspects of the downstream LPG sector in Lagos and Benin.

Outlook
These companies invested in the LPG industry due to favourable government policies and due to the growing LPG consumption in Nigeria. Quoting the chairman of Stockgap, “the future is gas”. Currently, Nigeria has an estimated LPG storage capacity of 80,000 metric tonnes. As demand is expected to increase, investment into different aspects of the LPG downstream sector will increase and more storage facilities will be constructed, by companies with already operating terminals as well as new companies. Some of these companies are also expected to work towards full vertical integration of the downstream LPG market. Lastly, the coastal areas of the country (e.g. Cross-River) are expected to host more LPG storage terminals, as companies cater to the needs of the population there.


KiakiaGas Limited is a leading Gas business in Lagos,Nigeria with expertise in LPG retailing, New Gas Market development, Building of Gas Plants and Gas strategy advisory.
If you need a partner with hands-on local expertise in the Nigerian Gas space or any of our bespoke solutions/services, write us at gaspreneur@kiakiagas.com or call/Whatsapp: +2348085269328